“Showdown in San Diego” – a new book release by Through People 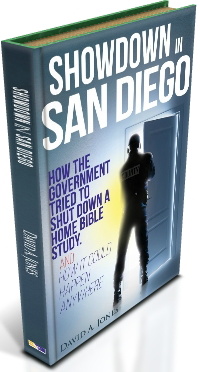 “Showdown in San Diego” is a soon-to-be-released book that chronicles the story of a San Diego pastor who was cited by the county for holding home Bible studies. Based on true events, the book highlights a growing trend in America. In today’s heightened religious climate, the right to religious assembly and freedom of speech is coming under fire from school districts taking out prayer and other such events.

“Showdown in San Diego” will launch in July 2015, but the first chapter is currently available online, for free. Go on the website and get your free chapter now: http://showdown.throughpeople.com/

Christians around the world have been persecuted over millenia for their beliefs, and the trend continues to grow. In America, where religious beliefs are protected by the Constitution, Christians are being singled out with other laws. For instance, the owners of a Christian bakery in Oregon were fined $135,000 for discrimination after refusing to bake a cake for a gay wedding. Other Christian businesses are being forced by the government to provide contraception that includes birth control and abortion-inducing medications. On an individual level, people are also being singled out through loopholes in the law books.

“Showdown in San Diego” is based on a 2009 incident in which Pastor David Jones and his wife received a written warning from the county that ordered them to stop the religious gathering they’d been holding in their home or apply for a major use permit. The couple was told by a code enforcement officer that they couldn’t invite people to their home for a Bible study without the permit, a designation that the County of San Diego charges tens of thousands of dollars for. Pastor Jones decided to write a book to tell the world, in particular Americans, what had happened and why he thinks it will happen again, and as demonstrated by recent event, he was right.

“This event was a serious case of denial of our right for religious assembly and freedom of speech. It was a clear invasion, an intrusion, into our private home life,” said Pastor David Jones, who is the founder and Senior Pastor at SBCC, where he has led the church since its establishment in 1980. “The problem is that our story is frightfully true and that most Americans were deceived into thinking that it was only a parking-related issue. Because of the seriousness of this, we have written this book to take readers on a journey with us through some of the falsehoods and reveal the truth.”

Dean Broyles, Esq., Founder and Chief Counsel of the National Center for Law & Policy, and attorney for David and Mary Jones, believes ‘the government’s interrogation of Mary Jones and legal threats against their small home Bible study is a powerful example of how we are rapidly moving from soft persecution of Christians towards hard persecution in America’.

Flooded with public complaints and accusations, the County of San Diego eventually allowed the Bible studies to continue and sent a formal apology to the Jones family.

The Jones family, however, is convinced that further persecution will continue, a belief that has been recently demonstrated by Christian businesses and individuals being persecuted by way of law books.

THROUGH PEOPLE Publishing and Distribution, an affiliates-based distribution company that puts artists and customers at the core of their approach, is releasing the book. THROUGH PEOPLE is proud to deliver this story to the public, a novel that aligns with the company’s mission to bring to people the books, music, movies, and art that inspire them. THROUGH PEOPLE looks forward to sharing the story of what happened in San Diego and challenging the public to take a further look at what happens today in America, to contemplate the consequences.

Share This
We use cookies to ensure that we give you the best experience on our website. If you continue to use this site we will assume that you are happy with it.Ok